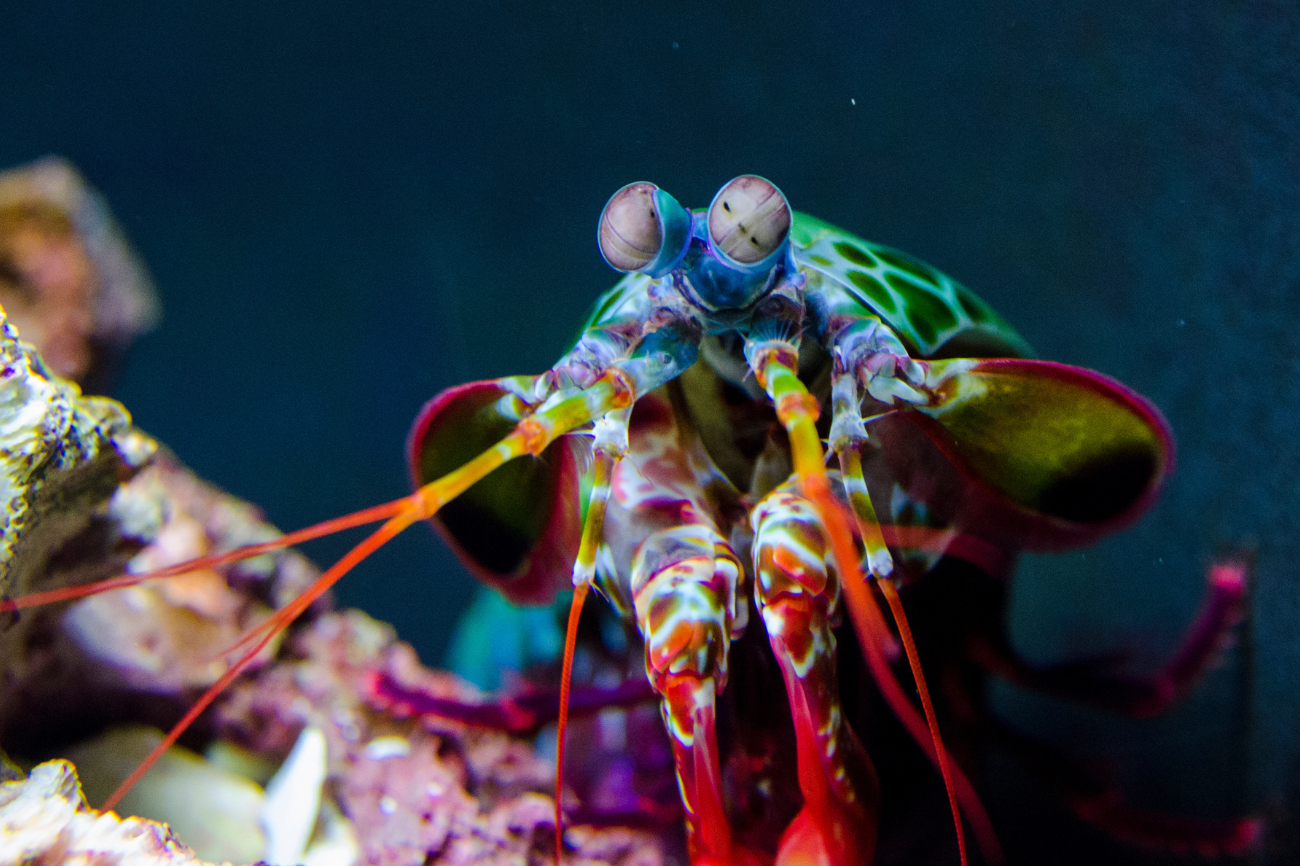 For some animals, life is tough — full of hostile environments and dangerous neighbors. To survive, many creatures have developed adaptations worthy of a bit of head-scratching. Here are a few such evolutionary traits, ranging from the quirky to the downright horrifying.

There is much that’s unusual about the maned wolf. Known as the “fox on stilts,” it is the tallest of the canid species and indeed looks part fox — though it isn’t actually related. The wolf’s gangly legs are thought to enable it to spy across the tall savanna grasslands it calls home. Its distinctive bark, called a roar-bark, is also quite unlike any other species.

But its most unusual trait is the smell of its urine, which smacks of marijuana. Curiously enough, scientists believe this odor is a warning to other maned wolfs to keep off their turf.

Among the 400 species of mantis shrimp that exist, some evolved to spear, some wield a hatchet-like appendage, and some — like the peacock mantis shrimp — go for a good old-fashioned smash technique.

This miniature creature packs a massive punch. Though it reaches only around 7 inches in length, the peacock mantis shrimp’s punch is known as the most powerful in the animal kingdom — breaking apart its prey with the force of a .22 caliber bullet. How the tiny critter doesn’t obliterate its own fist is due, in part, to a web of natural shock absorbers beneath.

On the island of Madagascar, black lemurs like to get high — and their supply is millipedes. Though these lemurs largely prefer eating fruits, on occasion they might grab a millipede, give it a bite and rub the toxin it sprays all over themselves. Scientists think this secretion acts as a form of natural pesticide, helping to keep unwanted beasties away. In the process, the lemur also gets its kicks.

Though certainly unusual, black lemurs aren’t the only species to practice zoopharmacognosy — or self-medication. Many other species rub, munch or lick their way to health in different ways. Not all of them, however, get a buzz out of it.

Most cat owners can attest that their fluffy feline friends aren’t too fond of water. But that’s not true of the fishing cat. This species of small cat, found across South Asia, is well adapted to a semi-aquatic life and lives in mangroves, marshlands and riversides. Equipped with partially webbed front toes, the fishing cat is a strong swimmer.

It also sports a kind of “thermal underwear,” a short layer of fur beneath its coat that offers a certain amount of waterproofing; this enables the cats to spend time hunting in water.

The parasitic crypt keeper wasp’s evolutionary trait is straight out of a horror show. The wasp lays its eggs in the hollows of oak trees, right next to those of other wasps like Bassettia pallida.

The crypt keeper’s larvae then burrow into the bodies of Bassesttia hatchlings and, when it comes time to hatch, prohibit them from chewing their way out of what has become a tomb; scientists are unsure how the crypt keeper achieves this gruesome feat, though it’s suspected to be a form of mind control. After the host is eaten, the young crypt keeper wasp slowly emerges through its victim’s head.

Matching up to the hardiness of the tardigrade is tough. With an evolutionary timeline that stretches back to the age of the dinosaurs, this miniature micro-animal — also known the water bear — is renowned for its ability to survive extreme conditions. With bodies less than 1 millimeter in size, these critters can survive high doses of radiation, freezing conditions, extreme pressure and being launched into space.

They do so by entering into a “tun” state, in which their bodies dry out and curl into a tiny ball, entering a state of protective hibernation. Unfortunately, the tiny creature can’t tolerate high temperatures for a sustained period of time. Still, the tardigrade likely takes the ticket as the evolutionary equivalent of titanium.

The College-Admissions Merit Myth - The Atlantic