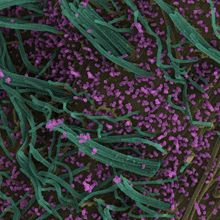 Many respiratory viral infections involve more than one type of virus, but the cellular dynamics of these coinfections and their effects on human health are often unclear. Now, a team has shown that two common respiratory viruses—influenza A virus (IAV) and respiratory syncytial virus (RSV)—can fuse to form a hybrid that better evades certain antibodies in vitro. The findings were published yesterday (October 24) in Nature Microbiology.

“This was an unexpected but very exciting discovery that challenges what we know about how viral particles are formed within a cell,” study coauthor Pablo Murcia of the MRC-University of Glasgow Centre for Virus Research says in a press statement.

To understand the effects of coinfection in vitro, the team infected human lung cells with IAV and RSV simultaneously. Using microscopy and live-cell imaging, the researchers found that viruses combined to form filamentous structures containing some bits from IAV and some bits from RSV, and that these hybrid virus particles could spread to other cells.

Treating the cells with antibodies against influenza A did not block the spread of infection, the researchers found. The hybrid simply used its RSV proteins to infect cells instead. “Influenza is using hybrid viral particles as a Trojan horse,” Murcia tells The Guardian.

The same was not true for RSV: antibodies against this virus did effectively stop the hybrid’s spread. “This suggests that, in contrast with IAV, RSV cannot utilize IAV glycoproteins to facilitate viral entry,” the authors write in their paper.

Stephen Griffin, a virologist at the University of Leeds who was not involved in the work, tells the Guardian that hybridization with RSV could potentially increase the severity of influenza infections. “RSV tends to go lower down into the lung than the seasonal flu virus, and you’re more likely to get more severe disease the further down the infection goes,” he says.

He adds that this sort of viral hybridization event hasn’t been observed in people, so more research is needed to establish whether it has any effect on human health.

“Our next steps are to find out if hybrid particles are formed in patients with coinfections, and to identify which virus combinations can generate hybrid particles,” Murcia says in the statement. He adds that “our working assumption is that only [a] few respiratory viruses will form hybrid viruses.”

See “Plenty of Evidence for Recombination in SARS-CoV-2”

The Quest to Save the Most Precious Voices on Earth

What Republicans Really Thought on January 6