Mice With a Healthy Gut Microbiome Are More Motivated to Exercise 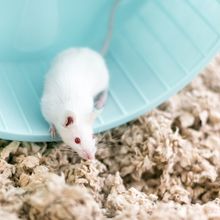 The gut is a jungle teeming with microorganisms that are instrumental to the process of digesting food, regulating metabolism, and defending against infection. However, research now suggests yet another way that the gut microbiome’s influence extends far past the bounds of its abdominal home. In mice, gut bacteria stimulate the production of dopamine during exercise, without which the mice lack the motivation to continue running, scientists at the University of Pennsylvania reported December 14 in Nature.

“This is the most comprehensive study I have ever seen,” says Theodore Garland Jr., an evolutionary physiologist studying the gut-brain axis in mice at the University of California, Riverside, who wasn’t involved in the research. “[It’s] pulling together lots of different pieces that we knew before in different contexts or in isolation of other parts in a way that hasn’t been done before.”

Exercise is “the single most effective lifestyle intervention that we have that protects us from a very large range of diseases,” says study coauthor Christoph Thaiss, a microbiologist at the University of Pennsylvania Perelman School of Medicine. Yet despite being a very physical activity, he says the success of an individual’s attempts to exercise often depends on their mental state. “If you look at what elite athletes say, many of them will say that they are not necessarily physically better than their competitors, but their mind is very well prepared,” he says. “But when it comes to preparing athletes, mentally or motivationally, for their competitions, there’s very little scientific evidence of how these methods might work.”

Previous research had already found that the gut microbiome can influence muscle tissue and cardiovascular fitness as well as brain chemistry. But Thaiss aimed to bring such findings together and examine the broader role of the gut microbiome in exercise performance. So, he and his colleagues set up an experiment using 199 outcrossed mice from eight different genetic backgrounds to ensure that any findings weren’t limited to one strain. Using multiple antibiotics, the researchers altered the mice’s microbiome communities: some mice had fully functioning microbiomes, while the others had their gut microbiomes either partially or entirely removed.

They then tested each mouse’s performance while running in two different settings: a treadmill, on which the mice were forced to run for an extended period to test their endurance, and a wheel, on which the mice were allowed to run as often and for as long as they wanted. Although all the mice were equally capable of moving around their cages, the mice with reduced microbiomes tired more quickly when exercising on the treadmill than mice with robust microbiomes. They also spent less time on the wheel, which the researchers attributed to reduced motivation to exercise.

Thaiss then searched for a neural explanation for the behavioral differences among the groups of mice. He and his team used RNA sequencing to analyze the mice’s striatal spiny neurons, which are involved in producing the behavior-reinforcing neurotransmitter dopamine both before and after exercise, and found that many of the genes normally expressed during exercise were dampened without the microbiome. When he performed an experiment limiting dopamine production during exercise by inhibiting these neurons, it had the same effect that limiting or entirely removing the microbiome had in the previous experiment. From these experiments, Thaiss inferred that the production of dopamine was a significant factor in a mouse’s propensity to exercise, and that a mouse’s gut microbiome composition played some role in the regulation of dopamine in its brain. That led him to conclude that the mice lacking gut bacteria didn’t experience the dopamine rush animals usually get through exercise, known as the “runner’s high.”

“If we can remote[ly] control the brain from the perspective of the GI tract, then this becomes a much more accessible problem.”

The question then became how microbes in the gut influence dopamine in the brain. To find out, the team inhibited a set of neurons that connects the gastrointestinal tract to the brain using formulated drugs. In the same wheel and treadmill experiments as before, mice with healthy microbiomes but inhibited gut-brain neurons exhibited reduced exercise rates on par with the mice with limited microbiomes, suggesting that it was the stimulation of these neurons that controlled the amount the mice exercised. Finally, the researchers treated mice with specific antibiotics to determine what kinds of microbes were triggering the neurons. They performed a metabolomics analysis to determine which bacterial metabolites triggered the neural response.

They found that metabolites known as fatty acid amides (FAAs) made by some microbes found in a healthy mouse gut were the most active during exercise. These FAAs generate neurotransmitters known as endocannabinoids. The scientists performed more experiments using ingestible inhibitors to determine that the endocannabinoids produced by the bacteria’s FAAs were stimulating receptors in the GI tract neurons during exercise, thereby triggering the neurons that subsequently stimulated dopamine production in the brain.

“It was really elegant the way they structured the entire story,” says Francesca Ronchi, an immunologist at the Institute of Microbiology, Infectious Diseases and Immunology in Berlin, Germany who wasn’t involved in the study. She adds that she was very impressed by the thoroughness of the paper. “You couldn’t do it better.”

Thaiss says that the next step will be to take this research from mice to humans and determine whether the same pathway exists in us. Garland explains that analyzing motivation in humans is more complicated than it is in mice: a person’s incentive to exercise is based on many more factors, including external ones such as their social environment and influence from family or friends, than is a mouse’s. “We don’t go and give our mice pep talks when they run a lot on the wheel,” he observes. In humans, by contrast, those that are naturally talented at some form of exercise may receive more praise, fueling them to exercise more.

Nonetheless, Ronchi says findings like these could one day reveal ways to stimulate exercise in those who need it, including cancer, Parkinson’s, or Alzheimer’s patients, for whom exercise is a valuable tool in mitigating symptoms. After all, if such a pathway does exist in people, gut microbes may be easier to manipulate or influence than neurons in the brain, Thaiss suggests: Unlike neurons, which are finicky and often inaccessible, gut bacteria could be influenced by an ingestible treatment. “If we can remote[ly] control the brain from the perspective of the GI tract, then this becomes a much more accessible problem,” he says. “But that’s still science fiction for now.”