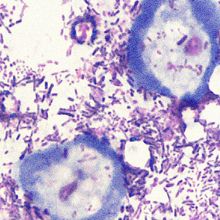 In 2019, researchers reported a new family of DNA viruses, Redondoviridae, which are frequently found in human mouth swabs and are particularly abundant in cases of periodontitis and other diseases. Until now, however, it was unknown whether Redondoviridae infects human cells themselves or one of the mouth’s resident eukaryotic microbes; the viruses’ genomic sequences suggested that bacteria were unlikely to be the hosts.

A new study published today (December 1) in Cell Host & Microbe points to the protist Entamoeba gingivalis as a host for these viruses, based on phylogeny, cooccurrence of both organisms in human samples, and culture analyses of the amoeba. These results bolster a computational prediction made independently by another group and published September 16 in Virus Evolution—while the new study was under review—that suggested this eukaryote as the most likely host.

“We wanted to know what cell they grew on,” as the redondoviruses are so abundant in human samples associated with diseases, says University of Pennsylvania microbiologist Frederic Bushman, who led the teams that proposed the redondoviruses as a new family and that conducted the new study on their putative host. These viruses “grow particularly well in [cases of] periodontitis,” he adds, so “we began looking at cells that are found in the gingival crevice” of humans, where teeth meet the gums.

A first series of analyses led them to E. gingivalis—commonly found in that crevice and associated with periodontitis—as a potential candidate. An early hint was that one of the closest relatives of the redondoviruses, the Naryaviridae family, infects the cells of another Entamoeba species. Then, as the researchers looked for possible cooccurrences of E. gingivalis and redondoviruses in human samples, using previously published data of their own and data from other research groups, they found a strong positive association.

Verifying this association in the lab was more challenging, Bushman explains. So far, it is not possible to grow this amoeba by itself in culture. Instead, the team obtained an E. gingivalis culture from the American Type Culture Collection that also contained feeder bacteria. In it, the researchers detected DNA and RNA of redondoviruses. As the culture had “been propagated for a while,” anything found in it “presumably had to be replicating there,” in the absence of human cells, Bushman says.

Finally, his team used a method called Hi-C to cross-link nearby DNA sequences in the culture. If a DNA virus is growing inside a cell, fragments of its DNA should link with those of the host when this method is used, Bushman explains. He and his colleagues did find chimeric sequences of E. gingivalis and redondoviruses with a higher frequency than expected by chance alone, adding further evidence that the amoeba is most likely the previously incognito host.

Identifying a virus in culture is, historically, “the gold standard” in virology for confirming a host, says Cormac Kinsella, a computational biologist at Amsterdam UMC and coauthor of the Virus Evolution paper. That, together with the DNA cross-linking analysis and the rest of the new study’s data, provide a “very firm conclusion” that E. gingivalis is indeed the host, he adds. Furthermore, Kinsella highlights that using very different approaches, both teams arrived independently at this finding.

However, identifying the host of these viruses does not yet reveal whether they play a role in disease, or whether their detection merely reflects the presence of the amoeba, whose role in disease is itself unclear. Even if E. gingivalis is indeed a pathogen contributing to periodontitis, “there’s no reason at present to think that redondoviruses are having an effect” on this pathogenesis, says Bushman. “But it’s not ruled out either.” For instance, they could be modifying the amoeba so that it is more successful at infecting, as an unrelated virus does with a parasitic protozoan.

Bushman emphasizes that, considering that most studies of the human virome focus on viruses that infect bacteria, this work highlights the potential of eukaryotic microbes associated with humans to act as hosts of viruses found in the human body.