Masayoshi Son said he would step back from running day-to-day operations at SoftBank to “devote” himself to turbocharging the growth of UK chip designer Arm, which is owned by the Japanese group.

In a 30-minute speech that the SoftBank founder said could be his final appearance at financial results, Son said he wanted to remain on the offensive with Arm as the technology conglomerate posted quarterly investment losses of $10bn.

“For the next few years, I would like to devote myself to Arm’s next phase of explosive growth,” Son said, “I would like to delegate financial earnings and other daily management operations to other executives.”

In addition to the losses, a person familiar with the matter said SoftBank would probably write down its approximately $100mn investment in collapsing crypto exchange FTX to zero.

Despite the investment losses, SoftBank returned to profit for the first time in three quarters but this was mainly as a result of its historic selldown of its stake in Chinese ecommerce group Alibaba.

For the July to September quarter, SoftBank reported an investment loss of ¥1.38tn ($9.8bn), compared with ¥2.93tn in the previous quarter for its two Vision Funds and a fund investing in start-ups in Latin America.

The company generated a net profit of ¥3tn in a sharp reversal from a record loss of ¥3.1tn in the previous quarter as a result of its Vision Fund investments being hit by the global tech rout.

Only two days after reporting its worst quarterly performance in August, SoftBank revealed that it would post a gain of ¥4.6tn by selling shares in Alibaba, significantly reducing the investment on which Son built his name as one of the world’s biggest technology investors.

In addition to the Alibaba sale, SoftBank also cut 30 per cent of its Vision Fund staff by the end of September and sharply reduced the size of its investments over the past six months.

On Friday, Son emphasised that he was “perfectly healthy”, in response to speculation he was ill after SoftBank revealed that he would no longer be giving his signature presentation to investors using his eccentric slides. 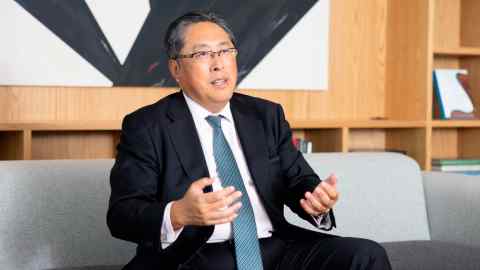 SoftBank’s plan to sell Arm to chipmaker Nvidia for up to $66bn fell apart in February after more than a year of wrangling with regulators in the UK, US and EU. Son has said he would instead take the company public in New York.

While Arm’s financial performance has been robust, a person close to the Vision Fund said the general IPO market is expected to remain challenging for the first half of 2023.

The chip designer reported net sales down 6.1 per cent in the first half of the year compared with the same period last year. Though royalty revenues increased more than a fifth, to $916mn, in part due to shipments of high-end 5G smartphones and higher royalty rates, non-royalty revenues including licensing income decreased 34 per cent to $459mn.

Despite the falling valuation of its Vision Fund investments, shares in SoftBank have risen nearly 30 per cent this year as the group sharply accelerated the pace of its share buybacks.

Watch Octopuses Throw Things at Each Other