Washington, D.C. – On Thursday, December 1, MoveOn Political Action will host a virtual celebrity One Chip Challenge event to raise money to fund get-out-the-vote efforts in the Georgia Senate runoff. During the live #ChipInForGA event, celebrities will participate in this viral internet challenge by trying to eat a single Paqui tortilla chip made with one of the hottest peppers on the planet, the Carolina Reaper. 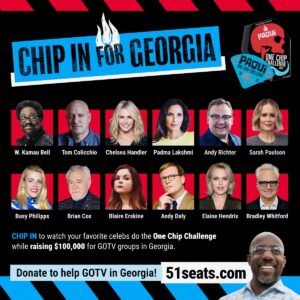 Celebrities such as Tom Colicchio, Chelsea Handler, Bradley Whitford, Andy Richter, Padma Lakshmi, Sarah Paulson, and more will be participating in the event.

The event is part of MoveOn Political Action’s campaign efforts to mobilize millions of members—including hundreds of thousands in Georgia—to vote, volunteer, and donate to ensure Senator Warnock is reelected. All of the proceeds raised from the event will be donated to fund local grassroots GOTV organizers in diverse communities across Georgia who are helping Democrats secure the 51st Senate seat: Poder Latinx, Asian American Advocacy Fund, Black Voters Matter Fund, and New South Super PAC. Said MoveOn Political Action Executive Director Rahna Epting, “Sen. Raphael Warnock has been a fighting voice for all Georgians. MoveOn is fully invested in mobilizing voters to support Warnock’s reelection, and we are thrilled to fire up GOTV efforts needed to secure the 51st seat in the Senate. Winning in Georgia is critical, and we’re all-in to ensure Sen. Warnock returns to the Senate.”

About MoveOn Political Action
MoveOn is a people-powered force for progress. MoveOn mobilizes the left to elect Democrats and enact progressive change. We are the homebase for millions of members who refuse to accept the status quo and are moved to take action. For more than a generation, MoveOn has been a bulwark against the radical right, channeling our voices to end wars, protect democracy, and advance justice for all.