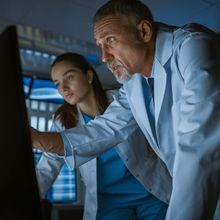 Many famous artists over the centuries are known for having produced some of their finest work toward the ends of their lives. When it comes to the field of biomedical science, however, a researcher’s work doesn’t usually improve with age, according to a study published October 7 in the Journal of Human Resources. Based on an analysis of millions of publications over several decades, it finds that biomedical scientists hit their innovative and creative peak early in their careers—an assertion with complex implications for a field in which older, established scientists have an edge in gaining funding.

According to Ohio State University economist and study coauthor Bruce Weinberg, people have been investigating how a person’s creativity changes over time for thousands of years, and it became a formalized scientific question around 150 years ago. However, until recently researchers have lacked the tools necessary to investigate these patterns at a large scale. As a result, many of the papers written about creativity and innovation trends focus on smaller groups. But while studies using small pools such as Nobel laureates have largely found that researchers become less innovative over time, others casting a broader net have found there is no change.

Getting a more concrete answer is particularly important for a field like biomedical sciences that relies heavily on grant funding, says Gerald Marschke, a study coauthor and economist at the University at Albany in New York. According to the paper, the number of researchers 56 or older funded by the National Institutes of Health (NIH) is now nearly double the number of funded researchers who are 40 or younger. The NIH has made efforts in the past to ensure that a consistent amount of grant money is awarded to young scientists by establishing quotas, but the average age at which a scientist receives their first NIH grant has nonetheless increased from 40 to 44 in the past 25 years. This is partly a reflection of the field itself: Scientists on average are older now than they used to be and may be retiring at a slower rate, leaving less room for younger scientists to build their careers.

Weinberg, Marschke, and their colleagues set out to reconcile the conflicting studies and to address whether the current allocation of NIH funding is likely to reach scientists at their creative peaks. Gathering 5.6 million research articles from the life sciences database PubMed that were published over a 30-year period, the economists extracted study author names and academic positions on the paper and used mathematical equations to score the innovativeness of a given paper based on the range of studies the paper cited and was cited in: Papers that cited newer studies from a wider range of fields and were themselves cited in papers in a wide range of fields scored higher in innovation than papers that had narrower focuses and built on older or outdated work. Papers were rated as higher quality based on the number of times they were cited.

“I’m really excited to see the next generation of research in the space of big data,” says Misty Heggeness, an economist at the University of Kansas who was not involved in the research. “They’re trying to disentangle how what see in the data helps explain innovation over a career, and the data they’re accessing is fantastic.”

Some young scientists will choose not to remain scientists because of the way the institutions are structured.

However, the researchers kept getting conflicting results: Like the studies before them, some of their analyses indicated older scientists were producing higher quality and more innovative work, while others landed on the opposite answer.

Then, the researchers realized they had failed to account for a game-changing factor. In other fields of study, selective attrition is the idea that certain types of participants may be more likely to drop out of an experiment or other activity than others, which can influence the results. Marschke and Weinberg realized that similarly, scientists who had longer careers were likely to be those who had higher quality publications to begin with; the pool of younger scientists, in contrast, still contained many scientists producing lower-profile work who were more likely to drop out of the field before reaching middle age. Mikko Packalen, an economist at the University of Waterloo in Ontario who was not involved in the research, compares the trend to professional sports: Players who have long careers, like Tom Brady or LeBron James, are the best of their generation, whereas the less talented or reliable players retire much earlier. In Marschke and Weinberg’s initial analyses, the scientists with less-cited papers brought down the average for young scientists, making it seem as though older scientists were more innovative in contrast.

When the researchers controlled for selective attrition by comparing only authors with the same positioning on papers or tracing just the older scientists over the course of their careers, “the paper wrote itself,” Weinberg says. On the whole, younger scientists were more innovative and creative than their older peers, building upon ideas and previous studies that were newer and more interdisciplinary. Older scientists tended to reference older and less innovative papers with narrower focuses, and on average, the impact of their papers dropped by one-half to two-thirds over the course of their careers. Using the sports analogy, Packalen points out that even though athletes like Brady or LeBron can be counted on to play well, they are nonetheless past the prime of their youth. “The Tom Bradys of science also have longer careers, but their productivity declines with age,” he says.

Weinberg and Marshke say it’s not clear whether the NIH should change how it allocates funding based on this finding, however. Although scientists in the analyses were on average more innovative early in their careers, Weinberg points out that as a group, younger scientists publish work of variable quality, meaning that funding earmarked for them is more at risk of being funneled into low quality research. Marschke also notes that older scientists often collaborate with younger scientists on their research, so reducing funding to older scientists could not only restrict their potential, but hurt younger scientists as well.

“Some young scientists will choose not to remain scientists because of the way the institutions are structured,” he says, and giving more funding to these researchers could “shift the power imbalance inside these scientific institutions.”

Heggeness agrees. “We have a really hard time within the sciences recognizing and giving space to people with diverse thoughts who come from diverse backgrounds,” she says. “We need to make sure the younger, innovative folks, no matter who they are, feel supported as they move through the ranks.”